It has a Medieval vibe, a mystery and a beauty that will travel you back in the Knights’ time.

Can you beat that?

But, there are many reasons why exploring it is a once in a lifetime experience.

Truth is, the exploration of Rhodes Old Town holds many surprises.

No wonder why it is one of UNESCO’s World Heritage Towns. You see, the hidden treasures of this Medieval Town are countless.

But the question is: Do you have the treasure map?

Good news! We have one for you.

So, keep reading to find out all the reasons why you should explore Rhodes Old Town. Plus all the well kept secrets of this mysterious place.

Rhodes Old Town, as we now know it, was built by the Knights of Saint John, back in 14th century. In fact, these Knights reconstructed Rhodes Town.

The thing about the Knights of Saint John, though, was that they had a great experience in building forts.

So, it’s not a surprise that Rhodes is such an impressive fortress!

Rhodes Old Town was constructed according to the time’s architecture trends. This means that it was built according to the model of the Theodosian Walls of Constantinople. Like almost every Medieval city back in time! And the best part is, Rhodes hotels reflect this Medieval magic, too!

In 1522, the Ottomans conquered Rhodes Town and the Knights of Saint John moved to Malta, after being defeated. The Ottomans did not break down the impressive walls of Rhodes Town. On the contrary, they fixed them and kept on maintaining them, during the following four centuries.

But, what’s the bottom line?

The construction of Rhodes Town’s fortress stopped in 1522. Since then, Rhodes Old Town remains almost untouched. This means the time has stopped in 1522 for this impressive Medieval Town.

If that’s not a good reason to visit Rhodes Town as soon as possible, we don’t know what it is!

2.The Palace of the Grand Master 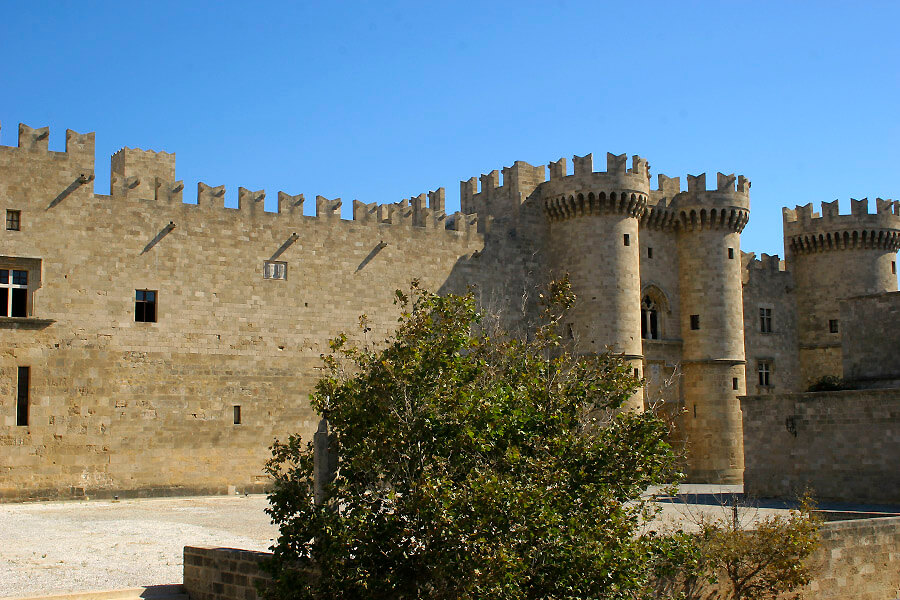 Well, this is a classic!

The Palace of the Grand Master is a huge stone made palace, built during the Byzantine times. The interesting thing is that it was initially built on the foundations of the temple of the God of the Sun!

However, it was reconstructed by the Knights of Saint John in the 14th century.

The reason why they created such an impressive palace was that it would serve as a home for their Master. Apart from the Master’s palace, though, it was also an administrative center and a fortress.

Picture this. An imposing building with a huge courtyard, kitchens, warehouses, and stables at the ground floor. Upstairs, there were large halls, an impressive dining room and the private quarters of the Grand Master.

Today, the Palace of the Grand Master is a museum. Entering this palace, you enter a different era! Inside of it you'll find multi-colored marbles, mosaics, sculptures, Oriental vases, frescoes and many more.

What’s more, on the ground floor you can find exhibitions, while several events take place at the palace.

3.The Archaeological Museum of Rhodes 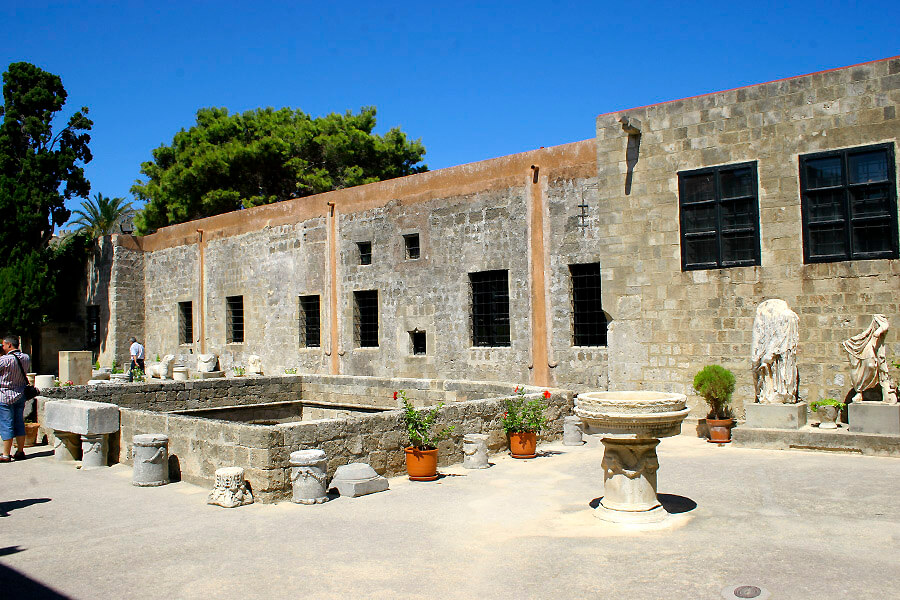 Do you want to get even deeper in the glorious history of Rhodes?

Then, you should definitely visit the Archaeological Museum of Rhodes.

The Archaeological Museum of Rhodes is located inside the Hospital of the Knights, in Rhodes Old Town. The construction of this impressive building started in 1440 by Grand Master de Lastic. It was completed, though, 49 years later by Grand Master d’Aubusson.

But, what can you expect to find at the Archaeological Museum of Rhodes?

At the museum’s permanent exhibition, you’ll see findings from excavations all over Rhodes island, as well as other islands of Dodecanese, vases, small objects, figurines, Mycenaean jewelry, sculptures of Classical and Hellenistic period and many more interesting exhibits.

4.The Street of the Knights 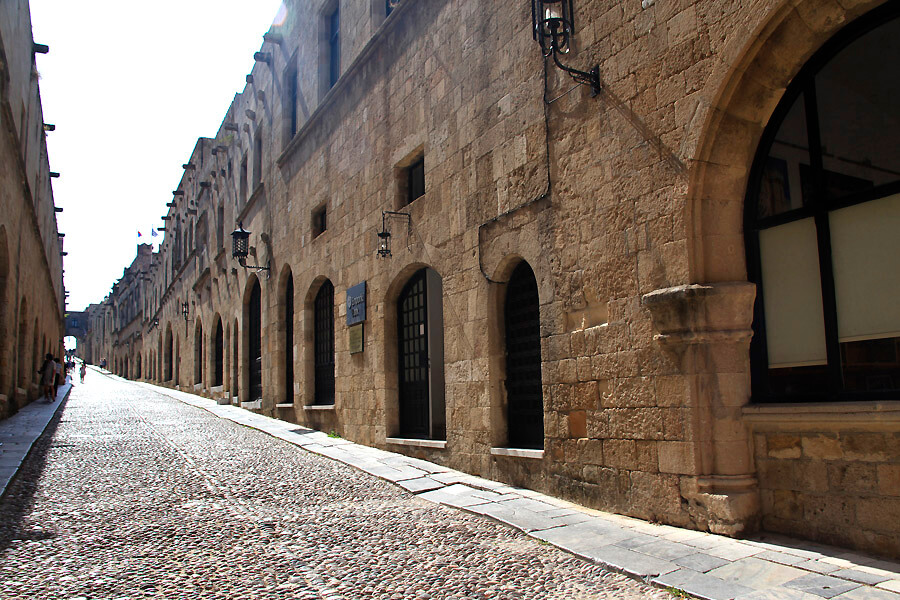 Ready to take a walk in the Medieval side?

The Street of the Knights starts from the Port of Rhodes Town and ends at the Palace of the Grand Master. It is a cobbled street, 200 meters long, built in the 14th century.

How about learning something interesting about the Street of the Knights?

The Knights of Saint John were divided into seven languages, according to their birthplace. Their birthplaces were England, Germany, Italy, Aragon, France, Auvergne and Provence. Depending on their language, they were responsible for a different part of the fortification.

That’s why at the street of the knights there were seven inns, symbolically representing the seven languages of the Knights. Today, though, four out of seven remain untouched.

5.The endless strolls at the cobbled narrow streets 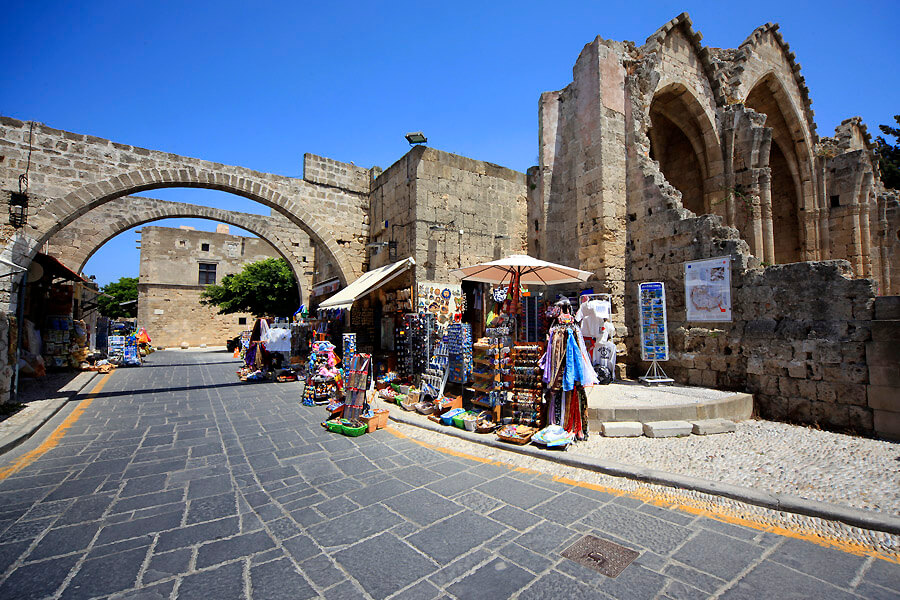 There’s no better way to explore Rhodes Old Town than by walking around.

Trust us when we say this. The best way to discover the most beautiful corners of Rhodes Old Town is to get lost!

Do you want to shop some Rhodian treasures to bring back home?

Orfeos Street and Socratous Street are the main touristic streets, full of shops.

The best part is, cars aren’t allowed in Rhodes Old Town. This means you can stroll around undisturbed! 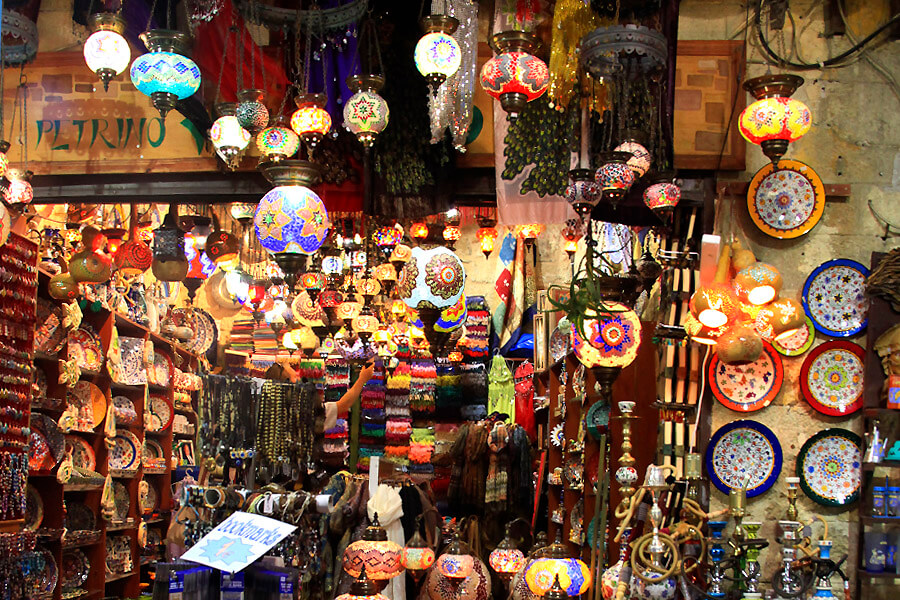 Rhodes, like every Greek island, has many locally produced goodies, worth buying!

So, don’t leave Rhodes Old Town without tasting and purchasing some of the following Rhodian treasures.

“Melekounia”, local sweets made of sesame and honey

Let's wrap it up! There are countless reasons why you should visit and explore Rhodes Old Town. One thing is for sure, though. Once you do so, you'll dive into a medieval fairy tale!

So, are you ready to book your trip to Rhodes?